The Museum of Technology – TechLand

Our students (17SA & 17SB) eventually completing both high school (Helsingin aikuislukio) and vocational studies (Stadin ammattiopisto) dived into TechLand just before the autumn break. Here’s a brief account of two of the students, Sebastian and Benjamin as what caught their eye and imagination there.

On 11th of October, we went to the Museum of Technology with our classmates. Our teachers of our subjects were English and math, but we went there by ourselves instead of going there with our teachers. The day was very sunny, but it was also very foggy during that day.
When we got there, the place was full of light and it looked very interesting and exciting. The selection of the objects was huge. It varied from home technology factory machines. They were old and fascinating.
We had a guide, who talked English to us throughout the
tour. She explained us a few sections of the museum. She didn’t introduce the whole museum because we didn’t have enough time. She introduced us few machines and objects.
One of the coolest things were car picking pliers as you can see on picture 1. 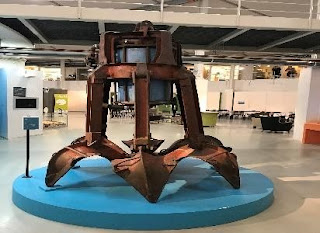 Another interesting object was a small block which looked like a smashed car. It turned out to be one. The photo of the smashed car is in picture 2. 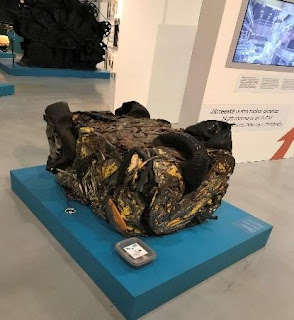 
on display in the museum. The car in question is on picture 3.
However, it wasn’t used a lot, because the range was small for
the car, and batteries were too big for the car. They were so
heavy that you had to push the car uphill. 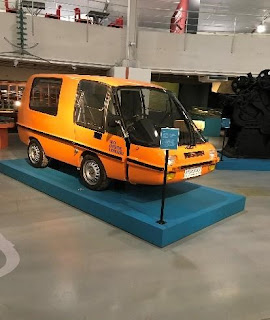 Finally, and without a question, my own favorite was
the pocket grinder. It doesn’t fit into anybody’s pocket but
it is very interesting and old looking machine. With this machine
was made all kinds of paper was made in its time.
You can see the machine in picture 4.